A wide range of art with something to offer for everyone

Art lovers can look forward to great museums and countless exhibitions on various different themes. Whether internationally-renowned artists, the work of a young generation of artists, art & technology, or jewellery, there is a museum for everyone. 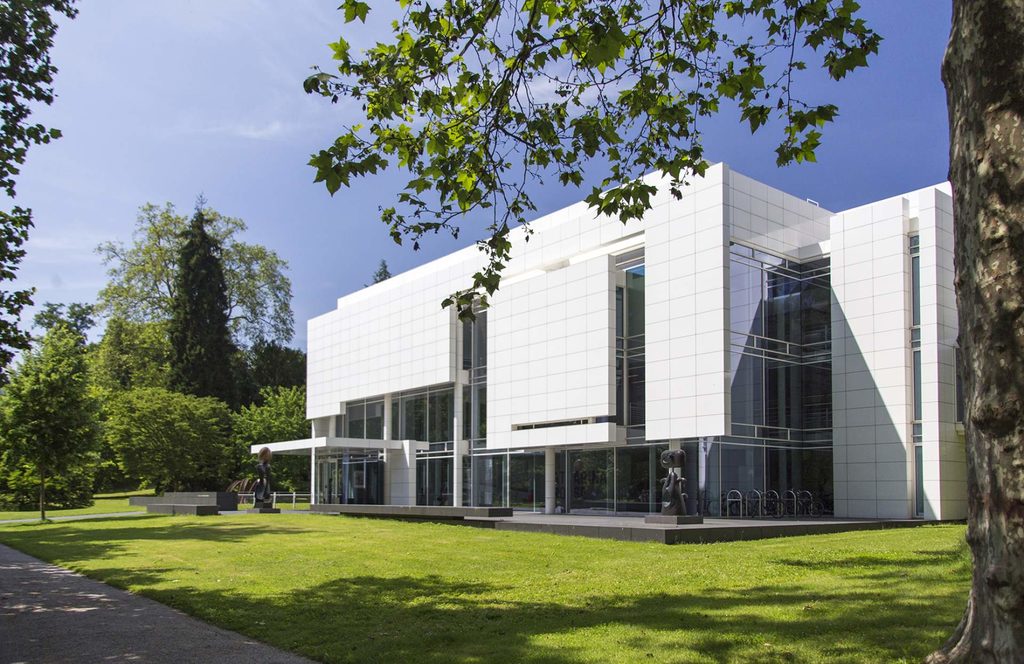 THE JEWEL IN THE PARK

Just around the corner from the Merkur Hotel, across Augustaplatz and a small, romantic bridge over the Oos, you will find the museum designed by the American star architect Richard Meier, which has been presenting the Frieder Burda Collection in Baden-Baden, in combination with other international masterpieces, since 2004:
A gleaming white solitaire with unique, light-flooded architecture, in which the interior and exterior, modern art, and romantic park landscape are in constant harmony. It is often referred to as the "Jewel in the Park".

The Museum Frieder Burda is located in the middle of the historic Lichtentaler Allee, directly adjacent to the Baden-Baden State Art Gallery, and is connected by a glass bridge. In a way that is currently unique in Europe, here a state cultural institution and private commitment to art complement one another.

The exhibition program of the young museum building is no less attractive than its architecture. It alternates between masterpieces by well-known artists of classical modernism and Frieder Burda's private collection, which includes stellar art pieces. With roots in Expressionism, it now comprises around 1,000 paintings, sculptures, and works on paper and has its main focus, among others, on Classical Modernism. With eight pieces, the collection possesses a convincing complex of works by the late Picasso. For the collector Frieder Burda, the fascination and enthusiasm for colour and the emotional, expressive possibilities of painting are at the centre of his interest in art. This has resulted in a collection of a personal nature that brings together pioneering positions in 20th and 21st-century painting.

Distance to the Merkur Hotel from Museum Frieder Burda is approx. 300 meters

Our "Art & Culinary Delight Special" is the ideal solution.
Visit one of the exhibitions, which changes over the long-term, and let us indulge you with a 4-course meal in our STERNTALER restaurant. 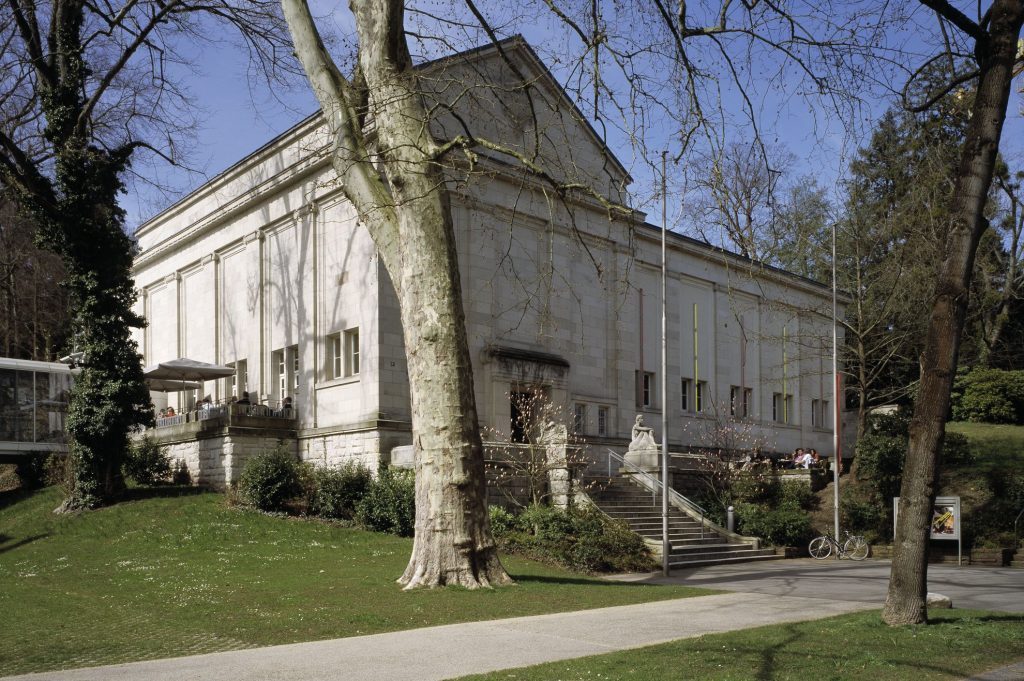 The Baden-Baden State Art Gallery, which is only a 3-minute walk from the Merkur Hotel, is an internationally-renowned exhibition institute and one of the oldest cultural institutions in the city and the region.

Since its opening in 1909, and especially since the 1960s, the Baden-Baden State Art Gallery has been committed to discussing international contemporary art.

Allow yourself to be inspired by modern and contemporary international art! The exhibition house, built by Hermann Billing and Wilhelm Vittali in the middle of the park in Lichtentaler Allee, is looking forward welcoming you. The neoclassical building, which does not house a collection, offers the ideal platform for dialogue between artwork and space, which provides a diverse forum for all types of media (painting, sculpture, photography, video, and installation).

Immerse yourself in the history of the Baden-Baden State Art Gallery. You can also discover digitally how artists have played with and changed the spaces to varying degrees.

IMMERSE YOURSELF IN THE HISTORY OF THE CITY

The Baden-Baden City Museum, located around 700 metres along the Lichtentaler Allee, and housed in the Alleehaus, provides an insight into the city's history with its permanent exhibition. Its focus is on bathing culture and spas through the centuries and sophisticated world baths in the 19th century.

There are also changing special exhibitions on the culture and history of the city.

The museum, whose history dates back to 1892, is located in the Alleehaus in the middle of the well-renowned Lichtentaler Allee. With the permanent exhibition, immerse yourself in the city's history and 2000-year tradition as a spa and health resort, and its unprecedented rise to becoming a sophisticated world spa in the 19th century.

Available free of charge at the museum ticket office. Audio guides for the permanent exhibition are available in German, English and French.

In the City Museum, selected exhibits and quotes from famous people and anecdotes from the spa town bring the past to life in a variety of ways.

The German, English, and French audio tracks make Baden-Baden's history "audible" for visitors. The audio guide is free of charge and comes with a floor plan.

At the beginning of the 19th century, Baden-Baden experienced an unprecedented rise from a romantic, dreamy country town to a sophisticated world spa within a matter of a few decades. The aristocracy and the upper middle classes, artists and gamblers, the elegant, and the demimonde from all over the world gather here. The international Badegesellschaft enjoys playing at the roulette table, attending concerts given by international stars, highly acclaimed theatre performances, balls, and the horse races in the nearby town of Iffezheim. The social life, romantic surroundings, and the game of chance secure Baden-Baden's status as the "Capitale d'été", the summer capital of Europe. 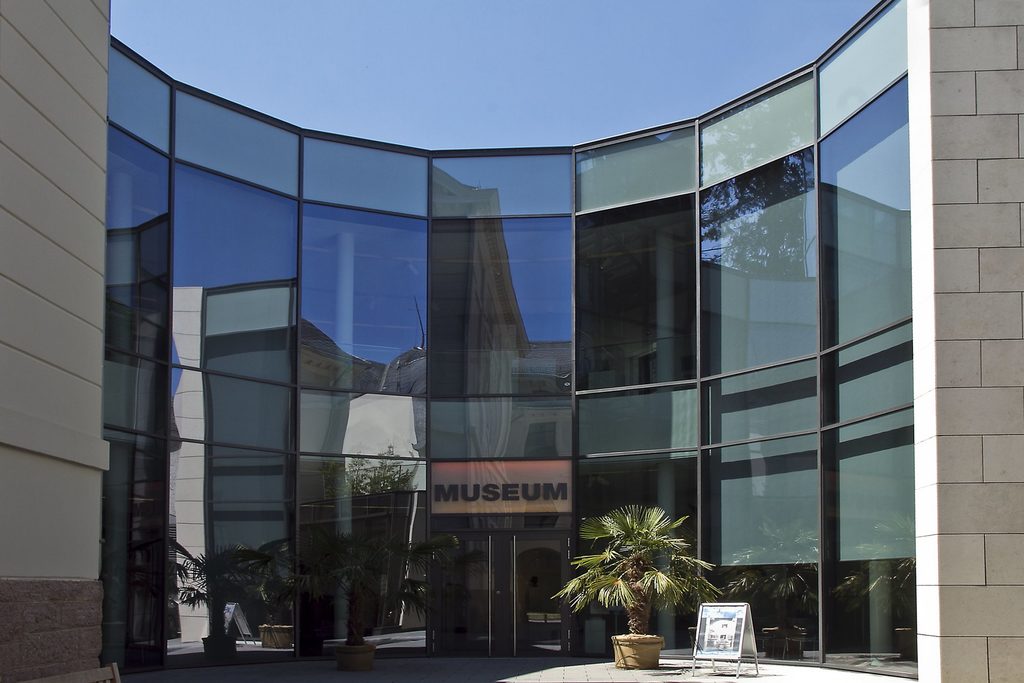 The museum is part of the cultural centre LA8, opened in March 2009 by the GRENKE Foundation, in the historical building on the "Museum Mile", Lichtentaler Allee, approx. 250 metres from the Merkur Hotel.
According to the most recent museological standards, a new building was added to the carefully-restored main building, which houses the Museum of 19th Century Art and Technology.

The museum, which is the only one of its kind in Germany, is dedicated to the intensive interaction between art and technology in the 19th century. Areas of particular interest include photography, the artistic and medical beautification of the human body, the romanticisation and simultaneous industrialisation of the Rhine, the peculiar coexistence of telepathy and telephony, as well as the (re)discovery of Egypt in the 19th century, or of the park as the city’s “green lung”. The history of mentality is full of overlaps between art and technology. Many of the things we take for granted in our everyday lives today can be traced back to this century of innovation: in addition to photography and the telephone, there is the car, the railway, paper money, and social "inventions" such as the nuclear family or compulsory education. In themed exhibitions, which change every six months, the exhibition shows how current and how close the century before last is to us in many respects. The programme accompanying the exhibitions, with workshops for children, readings and lectures, deepens the interaction with this century, in which Humboldt and Napoleon, Marx and Rothschild, Nietzsche and Bismarck, Liebig and Daimler lived and worked.

Distance of the Museum LA8 to Merkur Hotel: approx. 250 metres 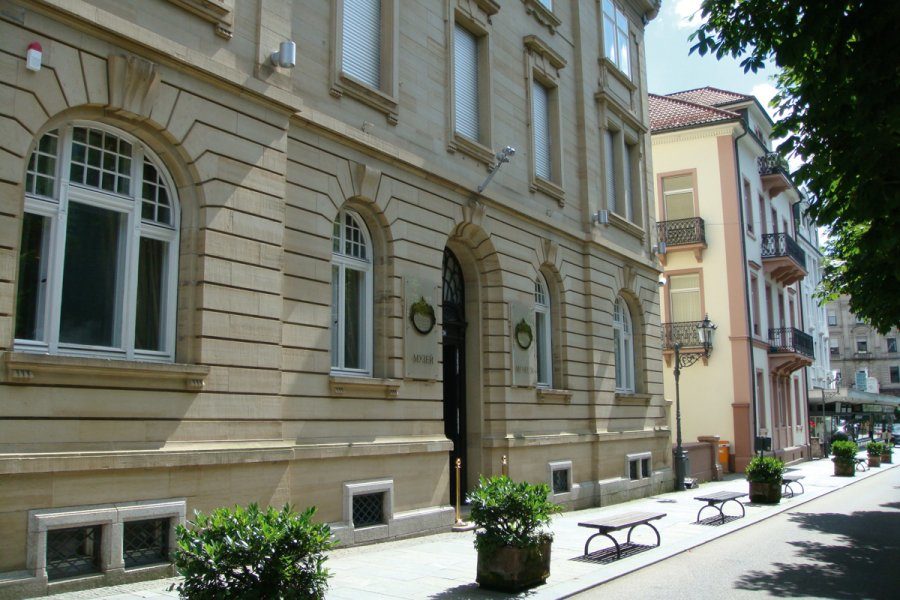 The Fabergé Museum is the first of its kind dedicated solely to the life work of Carl Fabergé. The entire spectrum of Carl Fabergé's work is represented in this unique collection: From the famous imperial Easter eggs of the Russian Emperors to exquisite pieces of jewellery and high-quality everyday objects from the First World War.

Carl Fabergé (1842 - 1920) was born in St. Petersburg, was a Russian goldsmith and jeweller, and achieved worldwide fame for his highly ornate and opulent jewellery, his work for the Russian Emperors, and for his unique style of enamelling.

The Alexander Ivanov Collection in the elegant Sophienstraße in Baden-Baden is the world's first and only museum dedicated to the life's work of the famous Tsar jeweller Carl Peter Fabergé. The museum's unique collection, with over 1,500 exhibits currently on display, showcases the entire spectrum of Carl Fabergé's career, from the famous imperial Easter eggs of the Russian Emperors to exquisite pieces of jewellery and extravagantly-designed objects for daily use dating back to the First World War. In this exhibition of magnificent jewellery, visitors will find, among other things, the world's largest collection of noble cigarette cases and a wide variety of witty animal miniatures made of silver and quartz, set with precious stones, diamonds, and stunning colours. The centrepiece of the exhibition is the 12.5-million-euro Rothschild Egg. Furthermore, two imperial Easter eggs, the "Constellation Egg" and the "Birch Egg" from 1917, will be on display. The works of renowned contemporary goldsmiths such as Bolin, Boucheron, Cartier, Ovchinnikov, Sazikov, Khlebnikov and Falize will also astound any visitor. In addition, the unique collection has an extensive archive that holds valuable treasures in the form of exclusive photographic materials and original personal documents by and about Carl Fabergé and his masters.

The museum also accompanies you on the fascinating journey through time into the world of craftsmanship during the "golden age" from the end of the 19th century to the beginning of the 20th century. 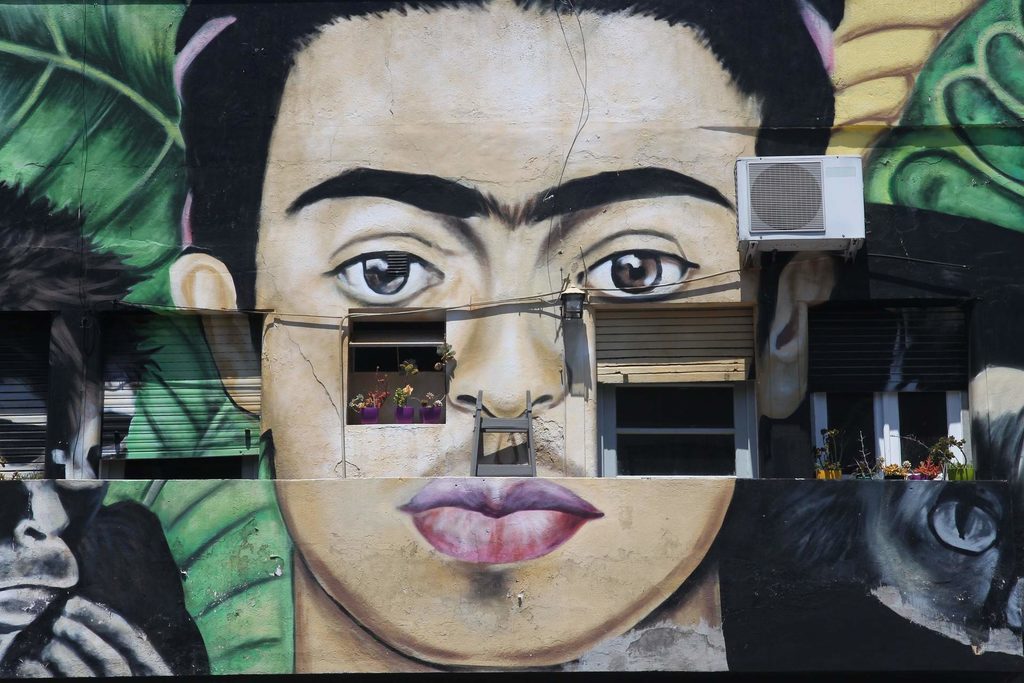 The exhibitions at the Gehrke-Remund Art Museum can be followed via the catalogue (free to borrow for each visitor) in 4 languages, which reveals the background and secrets of each painting, allowing visitors to gain an insight into Frida Kahlo's state of mind and world. 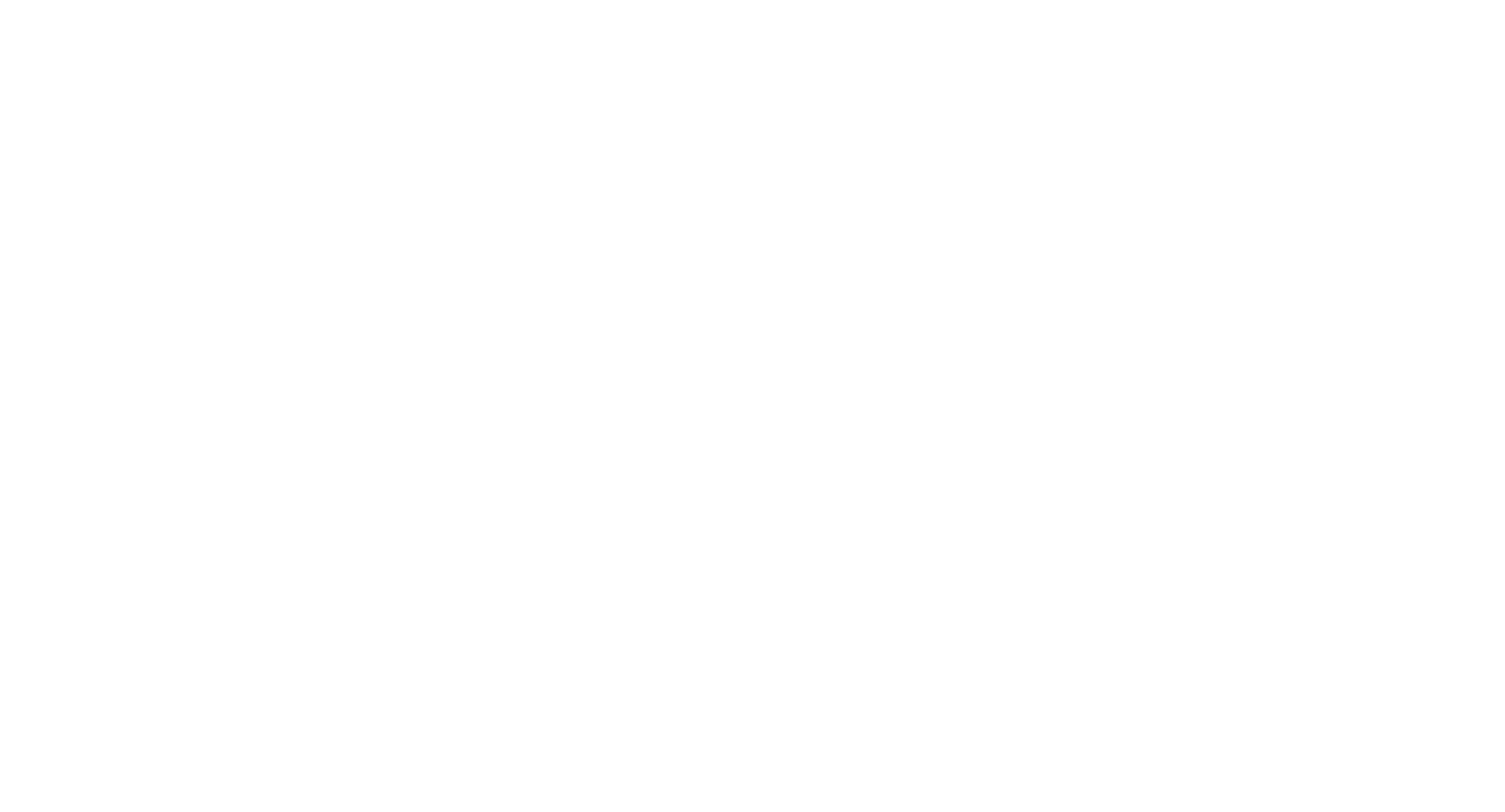